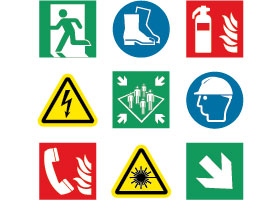 The International Organization for Standardization’s (ISO) Technical Committee 145 (ISO/TC 145) is one of the most influential standards-writing committees in the world.

This international committee standardizes the symbols that appear on products and for use in built environments. This includes symbols that indicate everything from the controls for “windshield wipers” and “headlights” in cars, “fast” and “slow” on lawn tractors, to the location of departure gates and baggage claim areas at airports.

Most importantly, this is the international committee responsible for the standardization of graphical symbols used on  safety signs, where the purpose is to save lives from tragedy.

We’re  pleased to report that our founder and CEO, Geoffrey Peckham, has been confirmed as the chair-elect of ISO/TC 145, and is set to begin his term in January 2018.

“The international standardization of graphical symbols is key to the communication of information in so many aspects of people's daily lives. To a large degree, I believe we all take it for granted that this global language of visual symbols is something that just exists. The fact that this is the case is, itself, a tribute to the last two decades of hard work on the part of ISO/TC 145’s experts and administrators. I look forward to continuing and building on this legacy,” he says.

To learn more about the process of standardization within ISO and how a new global language – independent of words – is being created to keep people safe from harm, watch our video, “ The Case for the Standardization of Graphical Symbols.”