A confined space has limited or restricted means for entry or exit, and it is not designed for continuous employee occupancy. Confined spaces include, but are not limited to underground vaults, tanks, storage bins, manholes, pits, silos, process vessels, and pipelines. OSHA uses the term "permit-required confined space" (permit space) to describe a confined space that has one or more of the following characteristics: contains or has the potential to contain a hazardous atmosphere; contains a material that has the potential to engulf an entrant; has walls that converge inward or floors that slope downward and taper into a smaller area which could trap or asphyxiate an entrant; or contains any other recognized safety or health hazard, such as unguarded machinery, exposed live wires, or heat stress. (https://www.osha.gov/SLTC/confinedspaces/index.html)

When Confined Space Safety Signs are Required
If your situation is considered a permit-required confined space, you must understand that OSHA pretty much requires you to post a safety sign at every entry point to that space. The OSHA regulation for confined space signs reads as follows:

1910.146(c)(2)
"If the workplace contains permit spaces, the employer shall inform exposed employees, by posting danger signs or by any other equally effective means, of the existence and location of and the danger posed by the permit spaces. NOTE: A sign reading DANGER – PERMIT-REQUIRED CONFINED SPACE, DO NOT ENTER or using other similar language would satisfy the requirement for a sign."

When Confined Space Safety Signs are Not Required
Ordinarily, information about permit spaces is most effectively and economically communicated through the use of signs. Consequently, signs would be the principal method of warning under the OSHA regulation. Alternative methods such as additional training may be used where they're truly effective in warning all employees who could reasonably be expected to enter the space. It is the employer's obligation to assure that an alternative method is at least as effective as a sign.

If a space has a locked entry cover or panel, or an access door that can only be opened with special tools, the use of signs may be unnecessary if the employer ensures that all affected employees are informed about such spaces and know that they are not to be opened without taking proper precautions, including temporary signs, to restrict unexpected or unknowing entry.

On the Need To Communicate Across Language Barriers
In situations where employers have people in their facilities that are not fluent in English, the current best practice is to post multi-lingual signage and provide multi-lingual confined space awareness training. Making the effort to provide this information in all languages spoken by affected employees will help to protect employees who do not speak English or would otherwise have had difficulty understanding or interpreting English-only signs. The example to the left is a confined space sign that has added a Spanish second language panel and a graphical symbol to enhance the sign's message.

- Have the ability to transcend language barriers

- They draw attention to the safety sign, making it stand out from the vast number of word-message based signs people see on a daily basis, and

- They can convey their intended message quickly, with a glance

Compare the confined space signs, below. The first sign uses the old 1941-era format (made obsolete by the ANSI Z535 standards in 2002) and relies almost completely on its text-only message to communicate its safety message. The second illustrates a safety sign in Russian. Unless you can read Russian, you have no idea what this second sign means. Pause and consider how you feel looking at the Russian sign. Can you better appreciate how non-English readers feel when they're presented with text-only safety signs in English? Unsafe, confused, threatened! Now you can better understand the need for using graphical symbols and possibly additional language text on the signs you depend on to keep your people free from harm. 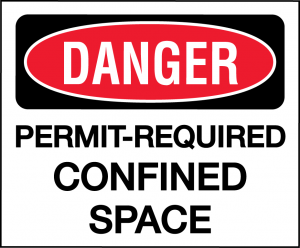 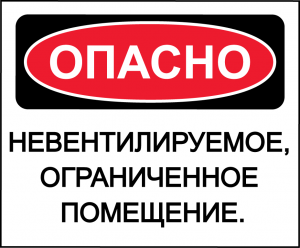 OSHA's Awareness of the Need to Communicate Safety Across Cultures
It's interesting to note OSHA's sensitivity to the possibility that English word message-only signs do not communicate and protect workers who do not read or speak English. Here again, the value of using graphical symbols is immeasurable. According to the 2010 U.S. Bureau of Labor Statistics, U.S. Department of Labor, 9 percent of the 4,340 worker fatalities in 2009 were from "exposure to harmful substances or environments" (390 people) and 9 percent of those worker fatalities were of Hispanic or Latino origin (35 people). One death is too many...but nearly 400 is a national tragedy!

Confined Spaces are not Limited by Industry
Confined spaces are common in a wide variety of industries including marine, agricultural, oil and gas exploration, pharmaceutical production, and food and beverage operations. Examples include:

Again, best practices dictate that word messages (and sometimes the symbols) for confined space signs be tailored to meet the exact needs a company has with respect to providing adequate standards-based confined space warnings. For more on the proper content and formatting of your company's safety signs, go to https://www.clarionsafety.com/todays-best-practice-safety-sign-systems/