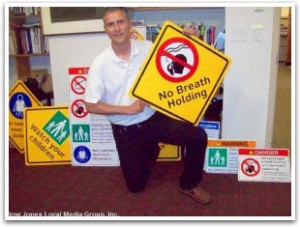 MILFORD – When Geoffrey Peckham studied aesthetics at Cambridge University, he never anticipated he would apply it to designing signs. He intended to be a photographer. But now he sees the logic.

"Aesthetics is a sense of beauty and form, seeing how things come together. That's what we do," he says of Clarion Safety Systems LLC, the company he began in 1990.

His use of aesthetics continues to thrive even in a limping economy, and his story provides entrepreneurs with both a model and cautionary tale. Likewise, his Milford office, dominated by a big circus poster of a tiger, is full of warning signs.

"You have to have a Monty Python sense of humor. How many ways can a person get banged up, sliced up, crushed, cut, electrocuted or entangled? Where are the pinch points in rollers or gears? But," Peckham adds, "it's not funny."

He is at work on a "No Breath Holding" sign that will appear at pools to discourage people from having breath-holding contests that can lead to blacking out and drowning.

"It has a road hazard format  – the yellow diamond with red and black print. So you have repetition, but also variety that separates it from hygiene signs," says Peckham. He is revising his current design so the face is outlined in black rather than solid to make it more "friendly".

"What's interesting is we see the inside of so many industries  – hog slaughtering, fabric, semi-conductor manufacturing. Dirt versus super-clean. Toxic gases versus dangerous machinery. Next week we do aluminum can manufacturing. What ties it together is reducing risk – the risk of liability, the risk of losing business and people. We're not a sign printing company. We're a risk reduction company," says Peckham.

He chairs the American National Standard for Environmental and Facility Safety Signs Committee and was on the post-9/11 expert task force for building safety. For Manhattan's "top tier buildings," like the Chrysler Building, CitiCorps and Rockefeller Center, Peckham designed green luminescent lines as borders for stairs that would be visible in a blackout.

Small details matter. For cross-cultural comprehension, he designed exit signs that show a man running rather than the word "exit". He also made sure no part could be used to clobber or stab someone, a concern in prisons and psychiatric hospitals.

Yet Peckham's triumph in this business was not always assured. Since he was 14 in Duluth, Minn., he envisioned himself a photographer. But in 1990, at 32, he was living in Alpina, Mich., doing photography and fixing up an old house, when his pediatrician wife became pregnant and he needed a more substantial job. He began doing technical writing for concrete block-making machinery, and one task called for making safety labels consistent with the national standard.

His work impressed the risk manager, who told him he might succeed with a company making warning signs. Peckham heeded his advice.

"It took me six years to hire an employee and turn a profit. Sometimes you need an 'angel,'" he said, meaning venture capital.

His 'angel' alighted in the form of his father-in-law, Edward Smith. Seeing Peckham's ardor and effort, Smith gave him $10,000, telling him to "pass it on" rather than pay it back. Peckham bought his first computer and published a catalog.

Now his catalog is much thicker, having grown from 300 designs in 1990 to 40,000 this year. He has 45 employees with benefits, which include the possibility of the Employee of the Week parking space in front of his office designed in the Frank Lloyd Wright flair. He "passes on" some of his profits to charities, particularly in Russia where, he says, because of alcoholism, the number of children is soaring in orphanages. It's the homeland of his adopted daughter Masha, now 18.

Peckham loves Russian culture for its aesthetics, its appreciation of the arts, particularly ballet and poetry.

"You have to be carried away with passion, take your subject, whether photography or making signs, to the next level. Infuse it with joy."