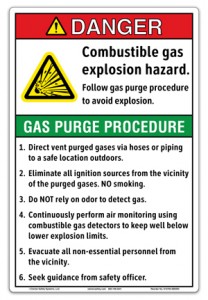 A sixth worker has died from the explosion Feb. 7 at the Kleen Energy Systems plant in Connecticut. Meanwhile, the first lawsuits, from workers who survived the blast, have also been filed.

Clarion Safety Systems has completed designing what it believes to be the only signage in the country that explicitly addresses this deadly gas purging hazard. The sign incorporates the latest guidance from the U.S. Chemical Safety Board, which is the federal agency that has led the way in calling for code changes to deal with the gas purging hazard. For installations that need large quantities, such as schools, universities or large corporate entities, simply email Clarion with your needs and the company will rapidly supply a competitive quote. The sign has now entered production at Clarion's Pennsylvania manufacturing plant, and virtually any order could be supplied within 10 working days.

Meanwhile, investigations by OSHA, the U.S. Chemical Safety Board and others continue. The explosion is now one of the items highlighted on OSHA's front web page.The fatal blast came just three days after the  Chemical Safety Board called for urgent code changes regarding gas purging. The background of the agency's move is here, including a recounting of the fatal disaster at the ConAgra Slim Jim factory last year. Details of Feb. 4's vote are here.

Request a Catalog
Get our latest safety label or sign catalog sent to you for free!