From time to time I like to share my viewpoint on what's happening in the world of best safety practices created by industries and standards committees. But today I'd like to reflect back on something that happened ten years ago – its a story that not many people know and it honors those who died on 9/11.

After 9/11, politics were set aside in NYC when the City created a special commission to explore ideas on how to make tall buildings safer. Changes to the City's building code and fire safety provisions were in the works, and one of the main areas of concern was how to evacuate buildings quicker and safer. As 9/11 proved, every second counts in emergency situations.

I became aware of the commission's work when its recommendations were published. The first provision called for photoluminescent egress markings to be placed in the stairwells of all commercial class "E" buildings over 75' tall. The City's Buildings Department was (and is) in charge of writing and enforcing the building code. They accepted the task to revamp the code to include these new stairway marking systems but they needed some guidance. A very particular kind of expertise was needed, one that had knowledge of the cutting edge of a certain kind of technology. As it happened, they were in luck. I had what they needed and I saw an opportunity to serve the City in their effort to better protect people from harm. I also knew people from my standards work that had aspects of the knowledge the City needed to write the new code specifications in a way that would achieve the City's goals. I remember that my overriding thought was that my background – my experience – could make a significant difference.

A Bit of History on "Safety Way Guidance Systems"
In 1996, an International Organization 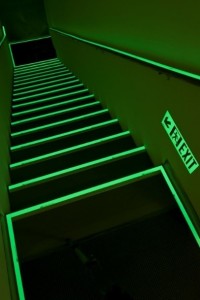 for Standardization (ISO) committee began work on a standard for safety way guidance systems for buildings, work that would culminate in the publication of a new ISO standard in 2002. This ISO committee, ISO/TC 145, was (and is) in charge of standards for all sorts of topics related to safety signs, symbols, colors and markings – and how best to design them. This particular field of emergency path marking systems was outside of my expertise at the time, since my focus up to that point had been primarily product safety labels. So, as Chairman of the U.S. delegation to this ISO committee, I wasn't aware that I had just stepped into a battle between the electrical and photoluminescent (glow-in-the-dark) industries.

Both of these industries had products that were meant to guide people out of buildings but they operated in fundamentally different ways. Each had their strengths and weaknesses. The electrical industry could light the stairways with emergency lighting and they produced LED strip lights that could be placed on the leading edge of steps and on handrails. In contrast, photoluminescent products were applied to the surfaces of things like steps and handrails and, once charged, they produced light that told you where to put your hand, where to put your feet. Both industries fought for dominance in the new ISO standard and in the end, the standard wrote specifications for both types of systems and let readers choose which products would work best for their situation. 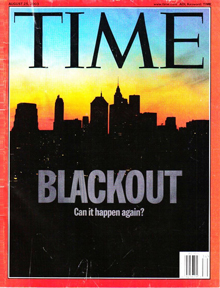 Photoluminescence Takes the Lead Over Electric
But on August 14, 2003 something happened that dramatically tipped the NYC 9/11 Commission's opinion in favor of photoluminescent safety way guidance systems, eliminating electrical systems from consideration. The Blackout!

A combination of old power lines, hot summer temperatures, trees, obsolete equipment and human error had created one of the largest power outages in history. 50 million people in the U.S. and Canada were left without power for hours. In NYC, many buildings' electrical backup power systems failed to work and people lit their way down dark stairwells with their cell phones. The full scope of the failure of backup electrical systems has never been documented, to my knowledge. But the number was huge and unexpected. The end result was that when the Commission wanted a "fail safe" solution for guiding people out of buildings, they turned to photoluminescence. As one code writer told me, "nothing with wires."

The Beginnings of the NYC Expert Taskforce
In 2004, the work from the 9/11 Commission was completed resulting in Local Law 26 – which had as its first provision for change, the installation of photoluminescent egress path marking systems in all the City's commercial class "E" buildings over 75' tall. I offered my services to form an expert taskforce to provide them with a "best practice" recommendation for what these guidance systems should look like and they accepted my offer. The taskforce I set up included experts with many different viewpoints along with my own, with expertise in photoluminescent safety technology, stairwell building codes, fire safety and human behavior in times of emergency. The most respected standards bodies in the world on this subject were represented, including ISO, ANSI, ASTM, UL, NFPA, and NIST. 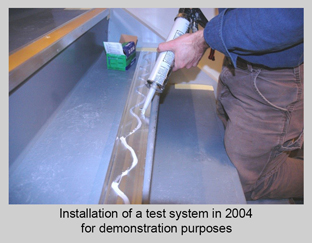 I led the taskforce, serving as its secretary, chairman, head writer and illustrator. The input from every member around the table at our three day conference in Brooklyn in August 2004, and during the next three months, was enormous. I think everyone realized the lasting impact our recommendation document would have in the field of building safety – we poured our hearts and souls into making it sound, practical and implementable ... with the main goal of making its systems effective. The end result was clear and concise. Since the systems were visual in nature, I had a team of helpers that set up prototypes of what they looked like in real NYC skyscrapers. I remember long nights – after hours when stairwells would not be used – drilling, screwing and adhering photoluminescent markings to stairs, walls, doors, handrails, landings and obstacles. It was hot, sweaty work but worth it. No one had really ever done this before. We were breaking relatively new ground and it was exciting to be a part of.

Lighting the Way for 2,800 Skyscrapers
With the cooperation of the buildings' safety and operational staffs, we shut the power off in stairwells and led the building code officials and Commission members down them. The markings proved themselves effective, demonstrating how intuitive they made the process of "seeing" the steps, obstacles and handrails. If you have never experienced photoluminescent way guidance systems at work, it's hard to convey how different and confidence-inspiring they are. You know where and how to move in a way that is completely different, and better, than illumination provided by a dim light source as you might find with an electrical backup system. It was truly amazing; the safety-grade photoluminescent materials did their job. 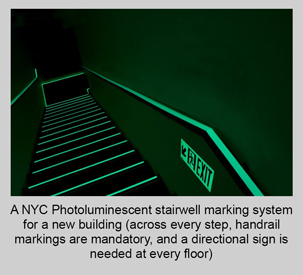 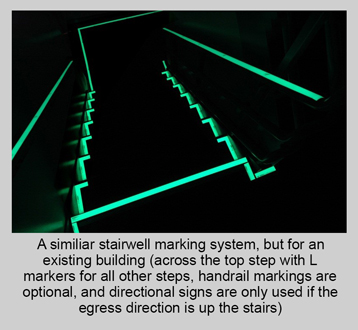 I should also note that until that point in time, these photoluminescent systems had rarely been used in buildings, though for years they were mandated for use on board ships, and they were increasingly being used on commercial airplanes to mark aisle paths. NYC would be the proving ground for a much larger application though: 2,800 skyscrapers.

In the photo, below, of the NYC expert taskforce, I'm pictured in the back row in the center of the image (the really tall guy), with Jake Pauls, a specialist in stairwell design to my right and Guylene Proulx, an expert in human behavior during crisis situations, in the first row in front of Jake. The three of us were selected from this group to be part of the code-writing taskforce that reviewed the final NYC code change. I'm pleased to say that this expert group pictured below, and the three of us who went on to review the code, gave credibility to the stairwell marking systems that were finally specified by the NYC Buildings Department in their RS 6-1 code. 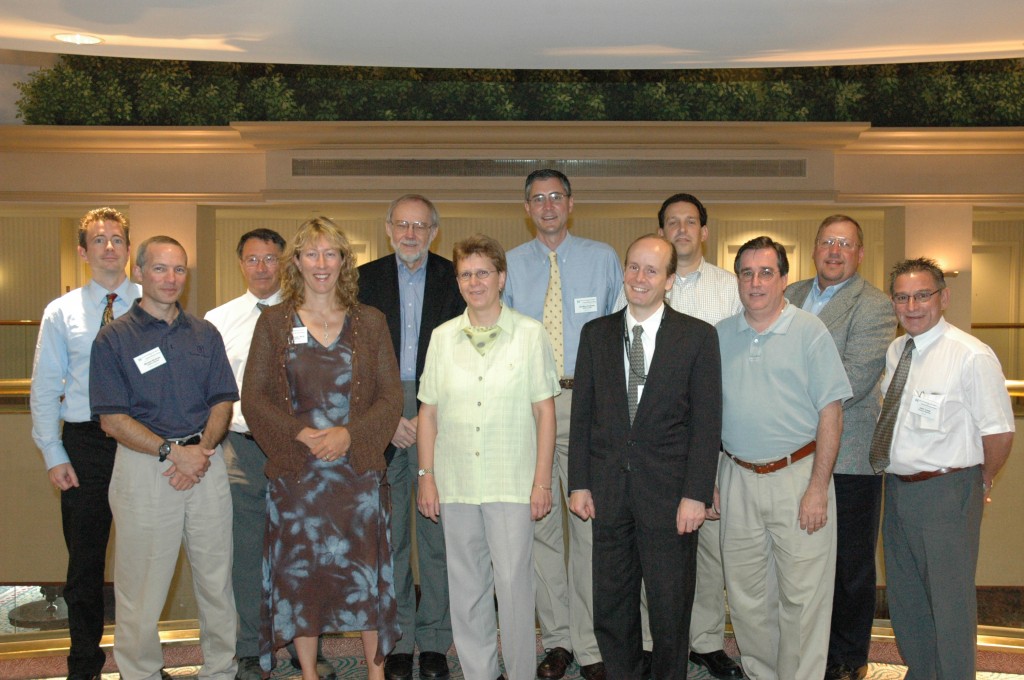 The City gave the class "E" building owners and managers one year to install the new stairwell path marking systems, and by July 2005, it was done. Nine years later, those who choose the right materials and right installation companies still have systems that work. Every time I go into NYC, which is around once a month, I poke my head into the stairwells of any of the tall buildings I'm in and check things out. By and large, the systems are doing great, meaning they're still in place, adhering to their intended surfaces, and not painted over. Since then, additional classes of buildings have been included in the scope for the use of photoluminescent stairwell marking systems.

...And Beyond
I should also point out that the same egress safety path marking technology is now included in the U.S. government's federal GSA building code and in NFPA 101 Life Safety Code (the document that serves as the basis for most state building codes). While it's still voluntary for building owners in most jurisdictions, the new evacuation path marking systems represent the new norm – the new bar – for best practices in egress safety.

I'm proud to say that this is just one of the stories to tell from the nearly three decades of standards work that I've been privileged to be a part of. At Clarion, we've continued to take the lead, devote the time and make successful outcomes happen for standards-based safety sign and label initiatives. Why do we do this? The answer's simple. Our passion is keeping people safe from harm. Whether it's in the form of a new building code provision, a product safety label or a workplace safety sign; our staff is committed to helping find solutions that meet our clients' need to reduce risk and protect people.

I look forward to continuing to share more stories about our work in the standards arena here on the Clarion blog.