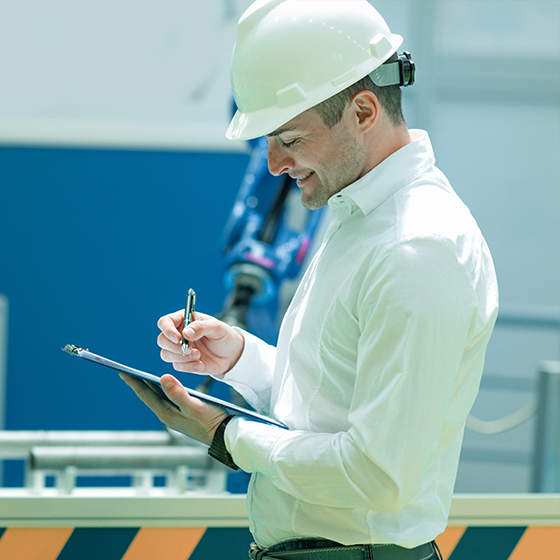 There are so many elements involved in bringing a safe, compliant piece of equipment or machinery to market. Our Clarion Safety Assessment team is here to help identify, remedy and prevent issues in your product safety strategy. We offer:

Seconds Save Lives in Times of Crisis
Seconds and minutes matter when people need to escape from your building. Whether it’s a fire, earthquake or other crisis situation, every second counts. Clearly communicating proper evacuation paths is essential to saving lives and making high "speeds of egress" possible. (“Speed of egress” is a term used by fire protection researchers to measure the movement of people during an evacuation.)

On the Cutting Edge
We’ve been highly involved in leadership positions on the standards-writing committees responsible for what are considered to be the state-of-the-art best practices for evacuation marking systems. Our founder, Geoffrey Peckham, has chaired ANSI’s Technical Advisory Group (TAG) that represents the U.S. at the ISO standards committee (ISO/TC 145) in charge of writing the global standard in this field, ISO 16069 Safety Way-Guidance Systems. He also chaired the special NYC expert committee that was set up after 9/11 to provide the NYC Buildings Department’s taskforce (which he was also appointed to) with a recommendation for stairwell evacuation marking systems. These recommendations for photoluminescent (‘glow-in-the-dark’) stairwell marking systems were subsequently written into the city’s high rise building code in 2004. In addition, Mr. Peckham was responsible for writing and submitting the 21 change proposals that added stairwell evacuation markings as an optional safety provision into the NFPA Life Safety Code - 2006 (and all subsequent versions of this standard, a standard which is incorporated in whole or in part into nearly every city and municipal building code in the U.S.). Dedicating the time to serve on these committees helps our customers in two ways: 1) our input helps to advance the technology in this field, which aims to help save lives, and 2) the knowledge and expertise we have in this field is unparalleled, which gives our customers access to the best products on the market.

A Brief History of the Global Standardization of Evacuation Marking Specifications
ISO recognized the need for a building evacuation markings standard in 1995. Over the course of several years, ISO/TC 145 worked on this standard (ISO 16069) and another standard for evacuation plans to be displayed on walls (ISO 23601). Subsequent to their publication, Mr. Peckham, assisted in the process of writing evacuation marking specifications into standards headed by NFPA, GSA, The New York Department of Buildings, and UL. Globally standardizing the format and content of evacuation markings and building evacuation plans makes sense. The goal is a uniform look and feel to the visual systems used to communicate escape routes so people can easily locate themselves in relation to the building they're in, understand possible escape routes from their present location, and then to easily find and navigate stairwells to the final building exits. Whether it's a hotel room, office building, factory or residential condominium, the information provided by these signs and markings saves lives in times of crisis.

Clarion Safety’s Egress Safety Systems
Given the serious role of escape plan signs and evacuation marking systems, implementation of these systems in your facility should be given high priority. Effective, best practice systems play an important life-safety function for forward-thinking building owners and managers. Every Clarion Safety stairwell marking system and set of evacuation plans is backed by our expertise and customized to meet your exact requirements. Our Customer Service Department staff will work with you on options to consider for these important signs and markings, including format choices, information requirements, customer-provided artwork file formats, and order quantities. We'll walk you through the process so the end result will be a set of signs and markings for your building that suits your needs to better lead people to safety.

Installation and Use of Escape Plan Signs
Escape plan signs are meant to be posted in key locations; next to elevators, near stairs, outside and inside large assembly areas, and on the inside of hotel guestroom doors. It should be noted that a building's escape plan signs are meant to work in tandem with the building's egress path marking and safety sign systems so that hesitation is eliminated along the escape path. For example, the visual cues provided by our photoluminescent path delineation markings in dark conditions work in tandem with our photoluminescent floor identification, fire extinguisher, fire hose, AED, safety equipment location, and exit signs, to give people the visual cues they need to orient themselves on evacuation routes, all the way to the nearest exit.

Interested in Egress Safety Systems?
View egress products in our online catalog
Contact us to discuss your specific needs